Why Did Boris Lose His Leadership Position? By Alex Afriyie 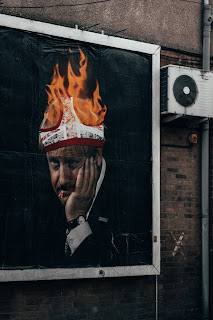 Why did Boris lose his position as the Prime Minister of Great Britain? Boris Johnson had the biggest conservative majority since 1985.

He was popular even with those who didn't normally vote Conservative. He was admired for a number of accomplishments like getting Brexit done and introducing the vaccine early in the UK.

So what was the problem?

Aristotle talks about three things being important for winning an argument.

1) Logos (LOGIC)- Your argument needs to be logical. People need to see that what you are saying and doing makes sense. I think people could see that with Boris. Even if they didn't initially agree with him on something like Brexit, they could see it made sense to be strong and stand up for Britain and get rid of European regulation and get good trade deals for the country. People also supported his leadership in defending Ukraine.

2) Pathos (EMOTION) - Your argument needs to make people feel something. They need to feel the anger of a cause with you, or sympathy for your point of view or even envy for what you are promoting. Boris also had the ability to win people through his open, humorous and enthusiastic way of speaking. He also related well to ordinary people by visiting them in their workplaces and wearing their uniforms.

3) Ethos (VALUES) - This is about values. You have to be trusted. That you are a person of integrity. You mean what you say and you say what you mean. This I think is where Boris failed.

People stopped believing what he was saying. Although many in his own party liked him and tried to defend him on numerous occasion it became obvious that he was liar. This meant he was a liability.

His party knew that even though his arguments were logical and people could connect emotionally with what he was promoting they just wouldn't trust him because his words and actions were not congruent.

It will be interesting to see who wins the Conservative leadership race and becomes the next Prime Minister of Great Britain and Northern Ireland. Will it be Rushi Sunak or Liz Trust? Who will win the arguments and be most convincing in terms of logic, pathos and ethos?

Bear this in mind when you are leading others: Are you making sense in their eyes (logos)? Are you connecting with them emotionally (pathos)? And are you someone who can be trusted by them (ethos)?